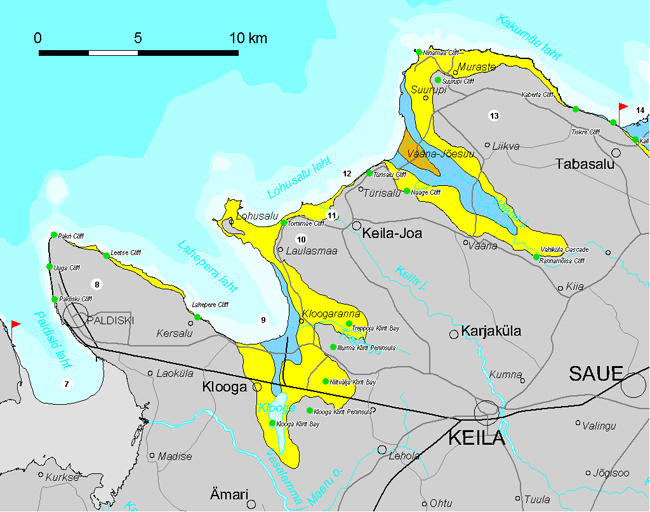 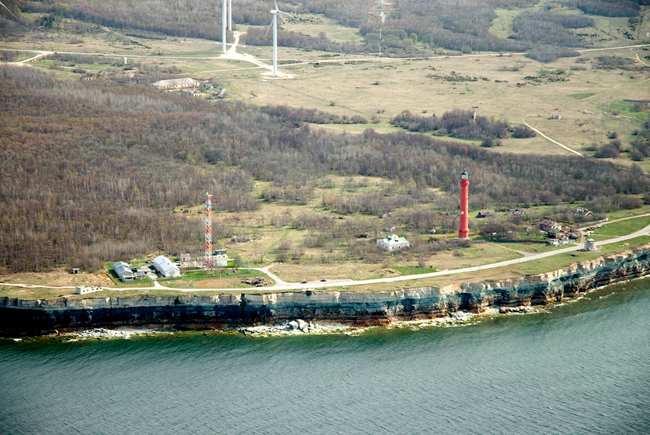 7. Paldiski Klint Bay cuts 12 km deep and up to 4 km wide (at mouth) into the klint plateau between Väike-Pakri Island and the Pakri Peninsula. In the south and southeast the escarpments bordering the klint bay flatten in the direction of Lake Klooga and Paldiski, respectively.

The deep and wind-sheltered Paldiski Bay has attracted seafarers already since the times of Vikings. In the 17th century, the Swedes established a sea fortress named Rågövik (“Rye Island Bay”, Ger. Rogerwiek) near the present Southern Port of Paldiski. Peter the 1st planned to build a giant military port of Rogerwiek here. The plan envisaged that the mole would offer shelter for the entire vast navy of Russia. Construction of the military port started in 1716. Despite the efforts of thousands of convicts, the planned 2-km-long giant facility could not be completed and even the completed part was quite soon destroyed by autumn storms. In 1762, the Russians (Catherine II) renamed the sea fortress of Rogerwiek into Baltiiski Port (“Baltic Port”, Ger. Baltischport). The precipices and hills preserved from the fortress at the northern edge of the town are popularly known as the Peter’s Fortress or Muula Hills. After the town came into the possession of Estonians, it was renamed into Paldiski in 1920.

In May 1940, both the Paldiski Peninsula and Pakri Islands were emptied of civilians to build Soviet military facilities here. In 1941, the town was occupied by the Germans, who burned down the town and the port at their withdrawal (1944). In the post-war period, the Pakri Peninsula and Paldiski Town were at the disposal of the Soviet Army and the port was used as a base of submarines. In 1960, a Submariner Training Centre was established in Paldiski and two training nuclear reactors were installed here. Soviet troops left the Pakri Peninsula only in 1994 and the reactors were closed down, too. 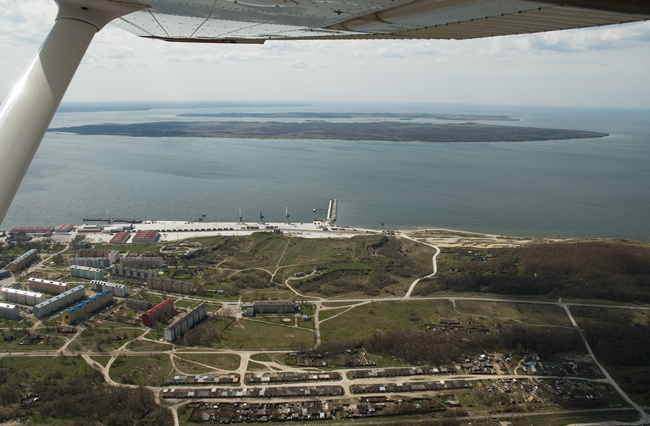 8. Pakri Klint Peninsula (12 km long, up to 5 km wide, area app. 35 km2) is edged by a klint escarpment, being one of the most remarkable klint sections of the entire Baltic Klint. The northwestward rising limestone plateau of the klint peninsula is 24 m high at the northern tip of the peninsula (Cape Pakri) and as high is the bordering escarpment. From west of Paldiski up to Kersalu in the east (for 18 km in total), the klint peninsula is bordered by a 2–24-m-high escarpment. Five separate coastal cliffs are differentiated here: Paldiski, Uuga, Pakerort, Leetse and Lahepere. 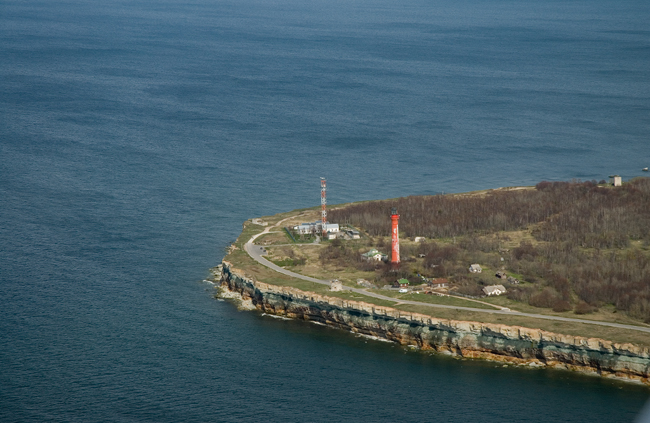 Paldiski Cliff, the southernmost of the coastal cliffs of the Pakri Peninsula, appears first at north of Southern Port as a 1–2-m-high limestone escarpment and runs north from there up to the Muula Hills, increasing in height along the way.

Uuga Cliff encompasses about 2 km of the klint between the Muula Hills and Pakri Cliff. Here the escarpment rises from 6–7 m to 20 m. When lower than 12 m, the escarpment consists of Ordovician limestone only. As the height increases, an app. 4-m-thick stratum of dark green Leetse glauconite sandstone and thereafter also app. 5 m of dark brown Dictyonema shale appear at the foot of the escarpment. 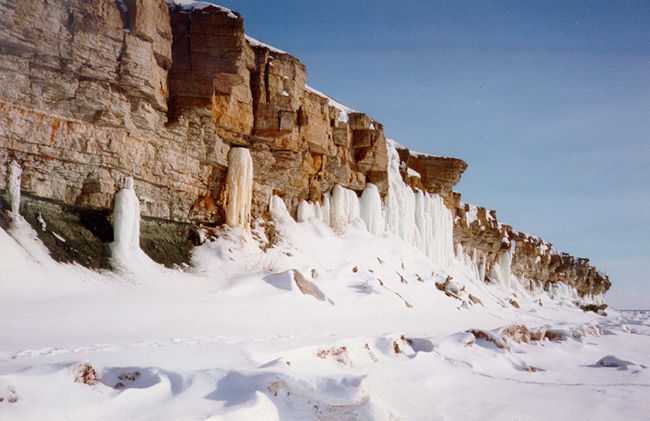 Pakri Cliff begins where an up to 4-m-thick stratum of yellowish brown Obolus sandstone and thereafter also light grey Cambrian sandstone becomes exposed at the foot of the escarpment. The highlight of Pakri Cliff is a 20–24-m-high variegated vertical escarpment bordering the cliff in the north for nearly 2 km. The tallest lighthouse of the Baltic Sea area (54 m) stands on Pakri Cliff. In 1724, the first lighthouse was built here. Its basement became exposed in 2008 at the verge of the escarpment as a result of an extensive landslip. 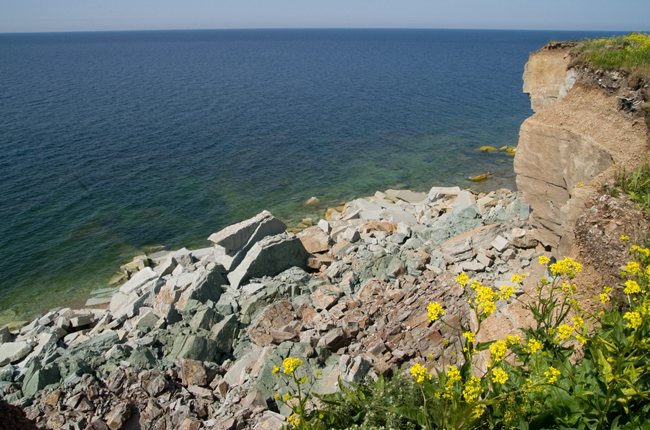 Traces of landslip at Pakri Cape in 2008.

Leetse Cliff, 15–20 m in height and up to 8 km in length, is a continuation of Pakri Cliff, extending app. 1 km east of the 17th century Leetse Manor. The eastern edge of Leetse Cliff is also the stratotype of the Leetse glauconite sandstone formation. The foot of the escarpment is mostly bordered with klint forest here. 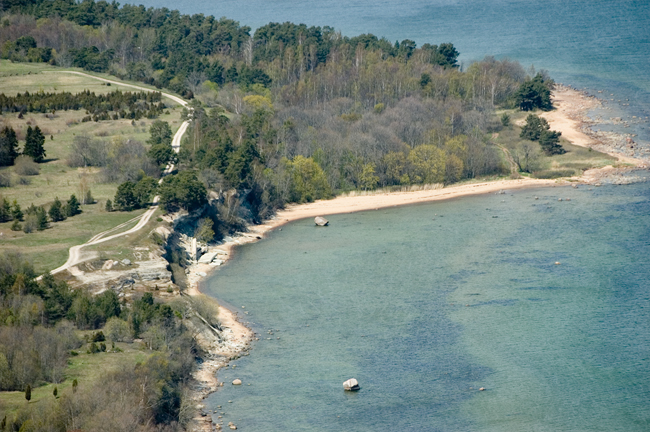 Lahepere Cliff encompasses 1.5 km of the escarpment bordering the Pakri Peninsula at southeast of Leetse Manor. The height of the klint escarpment decreases from 15 m to 10 m here but the foot is subject to sea abrasion in places. Three small and relatively water-poor waterfalls and cascades (Valli, Põllküla and Kersalu) descend from the escarpment here. 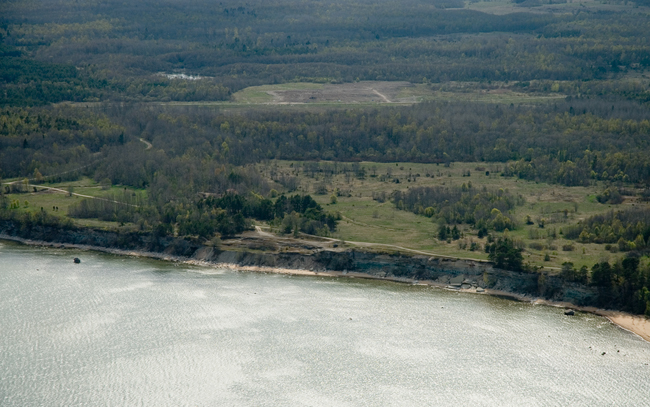 9. Lahepere Klint Bay cuts over 15 km long and up to 6 km wide into the klint plateau in northwest-southeasterly direction between the Pakri and Laulasmaa Klint Peninsulas. In its southeastern part (between Lake Klooga and Treppoja Stream), the klint bay divides into three smaller ones: Klooga, Niitvälja and Treppoja Klint Bays. These, in turn, are separated by Illurma and Klooga Klint Peninsulas. 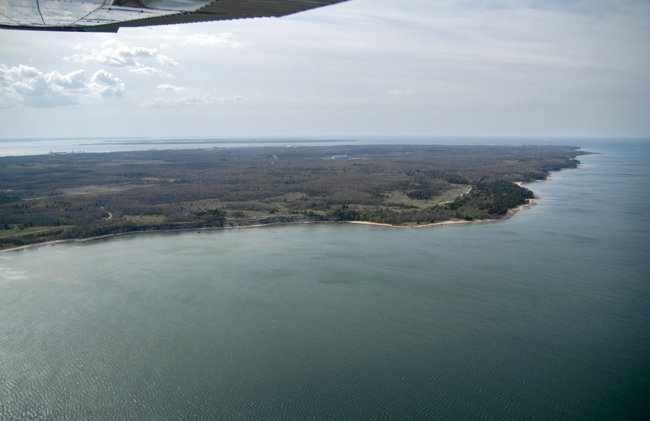 Lahepere Klint Bay is situated eastward of the Pakri Peninsula.

10. Laulasmaa Klint Peninsula constitutes the western part of the 10–12-km-long and almost as wide Laulasmaa-Türisalu Klint Peninsula located east of Lahepere Klint Bay. The Laulasmaa Klint Peninsula continues in the southeast (in the direction of Keila) as an app. 10-km-long, up to 2-km-wide and 10–20-m-high gentle-sloped ridge in bedrock. The klint peninsula is bordered in the north (northwest) by a 25–30-m-high, close-to-Pakri-type escarpment, whose base is covered in places with coastal ridges overgrown with pine forest untypical of klint foot.

Lohusalu Klint Island (app.1 km2) is a continuation of the Laulasmaa Klint Peninsula and cored by a blue clay ridge. At 2.5 km north of the klint island, an about 10-m-high elevation of Cambrian sandstone – the Lohusalu Shallow – rises from the sea bottom, which lies more than 20 m deep here. On 3 December 1941, a passenger boat Jossif Stalin ran into mines here with nearly 5000 Soviet soldiers evacuated from Hanko Base on board. About 2000 soldiers perished. 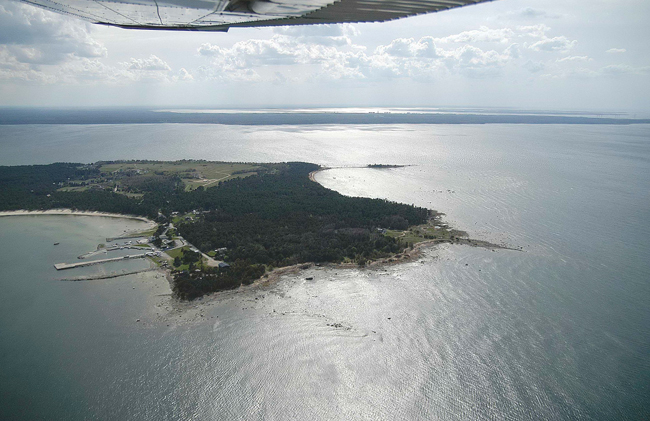 The small Nabe Island is a continuation of the Lohusalu Klint Peninsula.

11. Keila-Joa Klint Bay penetrates for nearly 1.5 km into the limestone plateau between the Laulasmaa and Türisalu Klint Peninsulas. The escarpment bordering the klint bay in the north is mostly sand-buried and hardly traceable in the topography. The klint bay continues in the southeast for nearly 15 km with the wide and gentle-sloped, up to 10-m-deep Keila River Valley.

The river descends into the klint bay, dropping over a 6-m-high and up to 70-m-wide waterfall and passing through an about half a kilometre long and a dozen metre deep canyon downstream of the waterfall. The first records of a watermill on the Keila River date from the year 1555. The small power station (250 kW) built on the waterfall in 1928 has been reconstructed several times (most recently in 2003). The waterfall of Keila-Joa together with a Neo-Gothic-style manor complex, suspension bridges, a park and the canyon under the waterfall, constitutes an attractive sight. 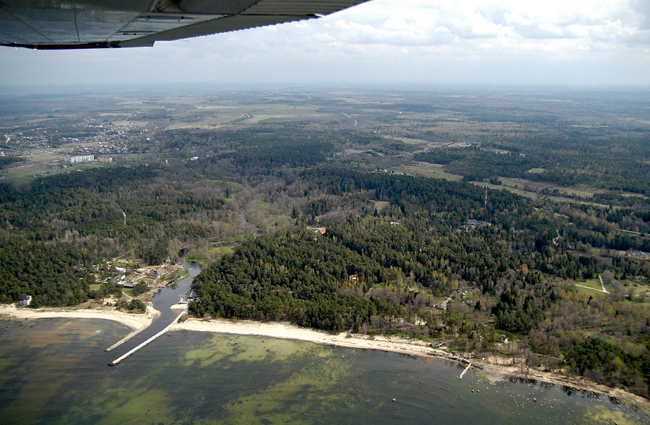 Vääna Klint Bay penetrates nearly 12 km long and 2–3 km wide into the limestone plateau in northwest-southeasterly direction between the Türisalu and Suurupi Klint Peninsulas. The klint bay is more than 140 m deep at mouth. One of the most original and imposing Late-Baroque-style manor houses in Estonia was completed in Vääna in the 18th century. 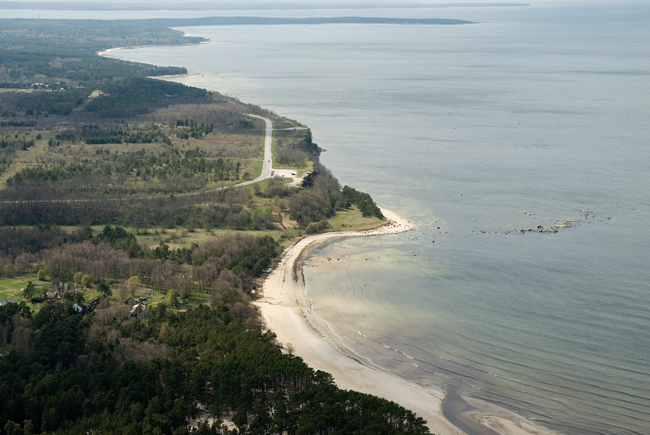 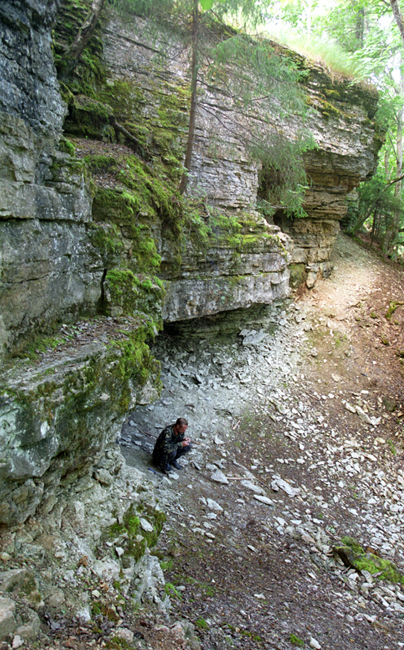 13. Suurupi Klint Peninsula protrudes up to 10 km northwest between the klint bays of Vääna (in the southwest) and Harku (in the northeast). The limestone plateau of the klint peninsula lies at the altitude of 30–40 m asl here and is largely covered with open alvar on which Ordovician carbonate rocks are exposed under a thin layer of Quaternary deposits (mostly thinner than 1 m). The klint peninsula is bordered in the north by a Suurupi-type two-scarp escarpment with an up to 1.5-km-wide Cambrian terrace characteristic of this type of escarpment.

The landmarks of the Suurupi Klint Peninsula are internationally protected lighthouses built in 1760 and 1859. At the tip of the klint peninsula lie also the buildings of a sea fort of Peter the Great (built in 1913–1917): concrete bases of coastal batteries, ammunition depots, troop buildings and observation points. 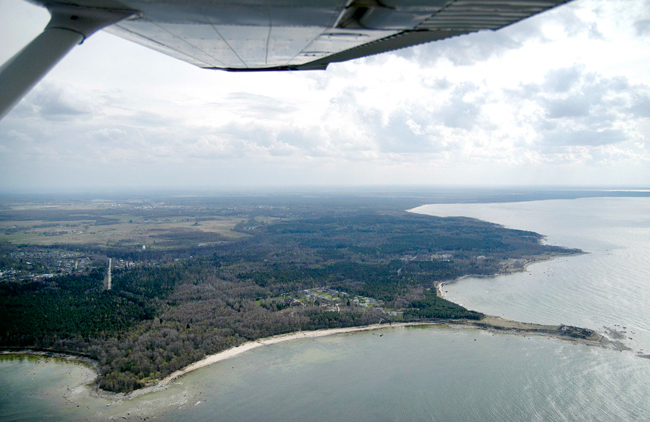