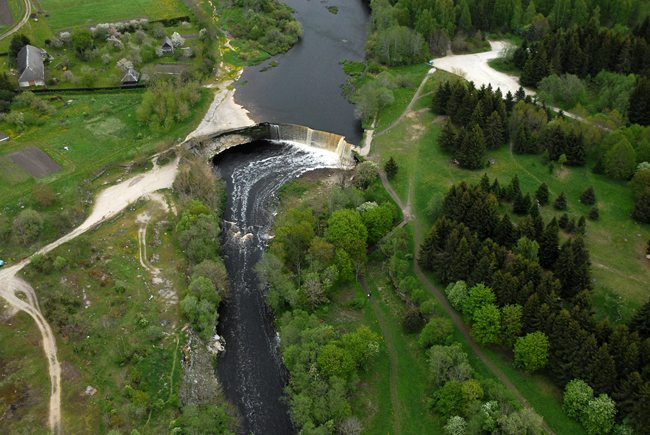 Waterfalls and cascades are located mostly on streams, rivers and ditches descending from the Ordovician limestone plateau, on the contact between hard carbonate rocks and the underlying considerably softer sandstones. The formation mechanism of a waterfall on the North Estonian Klint is in itself simple: water falling down an escarpment consisting of harder rocks (limestone) abrades a recess into the softer rocks (sandstone) at the foot of the escarpment. The rate of this abrasion is highly variable. For example, during the torrential rain of August 2003, Valaste Waterfall abraded an over 5-m-deep canyon into the blue clay under the waterfall within just a few days and the height of the waterfall increased to 32 m.

But not all waterfalls and cascades in the North Estonian klint zone are located on the boundary between a limestone and sandstone complex: several of them are either in a limestone or in a sandstone complex. For instance, the cascades of Treppoja, Vahiküla, Joaveski, Vasaristi and Aluoja have limestone escarpments, while some smaller waterfalls and cascades (Türisalu, Harku, Rocca al Mare, Turjekelder, Ahermu, Utria) have sandstone escarpments. 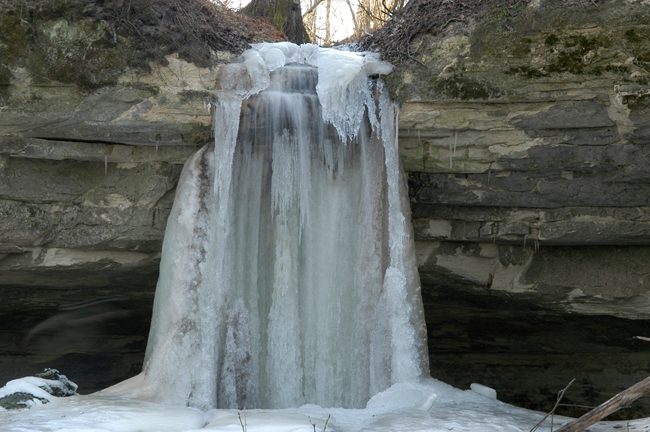 Not all waterfalls in the area of North Estonian Klint are created by nature: many a one of them is located on a drainage ditch dug by man. The limestone plateau has a slight southward dip at the edge of the klint (1–5 m per km), which prevents the runoff of surface water draining here from the south. Several smaller rivers and streams (Varja, Pühajõgi, Mägara) therefore do not flow north in this zone like most of the rivers in North Estonia do but they flow west-east or east-west and the fertile-soil lands at the edge of the klint plateaus tended to become waterlogged. To divert the surplus water, deep ditches were dug through the limestone plateau up to the edge of the klint plateau (e.g. the Kaasikvälja drainage ditch is ca 5 m deep) and this is how the highest waterfalls and cascades in Estonia (Saka, Karjaoru, Valaste and several others) were born.

Humans have not only created but also destroyed waterfalls. In a few cases waterfall escarpments have been broken by limestone mining (at Joaveski) but in most cases they have been deprived of what makes an escarpment a waterfall – water, by building hydropower stations. 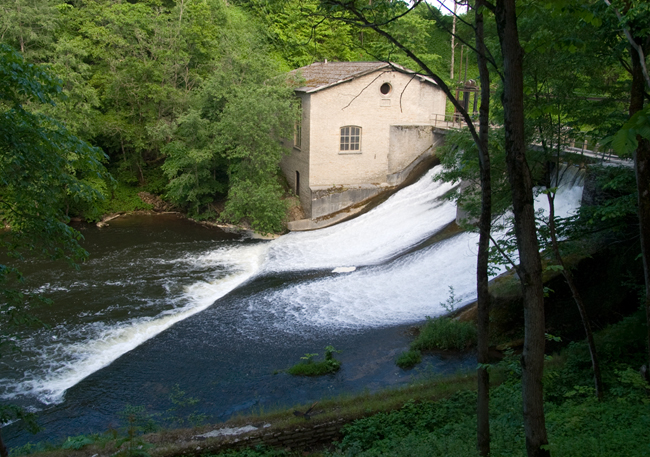 Hydropower station on the Kunda River.

The first records of watermills on descents of water in the area of the North Estonian Klint date from 1241, when the Danish Census Book (Liber Census Daniae) refers to a watermill located on Jõelähtme Cascade. A watermill located on the Härjapea River in Tallinn was mentioned in 1279 as belonging to the St. John’s (Jaani) Almshouse “already since times long past”. Also the name of an ancient hill fort on a cape on the Selja River – Varangu Veskikants – refers to a watermill located there at the time. The watermill on Keila Waterfall is first mentioned in 1555. Swedes took the power of Narva Waterfall into wider use in the 16th century. A watermill on Jägala Waterfall is first marked on maps from the Swedish period (1688). Several small hydropower stations were built on the waterfalls and cascades of the North Estonian klint zone in the 1920ies: Keila 1928; Jägala 1917; Linnamäe 1924; Nõmmeveski on Valgejõgi River 1924 and Joaveski on Loobu River 1924. In 1955, Narva Waterfall, one of the mightiest in Europe, essentially ceased to exist when the Narva Hydropower Plant was established in Ivangorod and the water of the fall was diverted to its turbines. This did not destroy the waterfall completely yet: the dam gates are opened for a few days a year to clean the riverbed and Narva Waterfall can then be seen almost in its former beauty and might again.

Narva Waterfall or, more specifically, its escarpments, are located at where Kreenholm Island divides the Narva River into two: the up to 60-m-wide and up to 6.5-m-high Kreenholm Escarpment in the west and the up to 110-m-wide and up to 6.5-m-high Joala Escarpment in the east, on the border between Estonia and Russia. The top of the waterfall escarpments consists of iron-ooid-containing limestone of the Middle Ordovician Aseri Stage and lies at the level of up to 17 m asl on both the eastern and western escarpment. The foot of the escarpments lies at the level of app. 10 m asl and is an outcrop of glauconite-containing variegated limestone of Volkhov Stage. About 200 m upstream of the main escarpments, the river drops by nearly 2 m within a distance of 50 m. During the spring high water of 1926, the discharge of the Narva River was measured at app. 2000 m3/s, while the present average discharge is considerably smaller  (up to 400 m3/s). 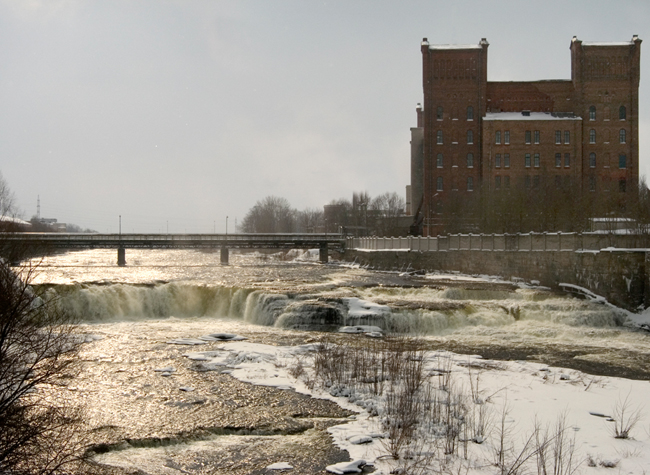 Jägala Waterfall on the Jägala River in Harju County is the mightiest of the continuously functioning waterfalls in Estonia: the average discharge of this up to 60-m-wide and 8-m-high waterfall is 12.8 m3/s (up to 200 m3/s during the spring high water period). Formed on the boundary strata between limestone and sandstone complexes, Jägala Waterfall has been retreating ever since its formation about 3000 years ago, leaving behind a 280-m-long and 10–14-m-deep canyon. In the years 1688–1931 the waterfall retreated at a rate of app. 17 cm a year (Kaljuvee 1931). 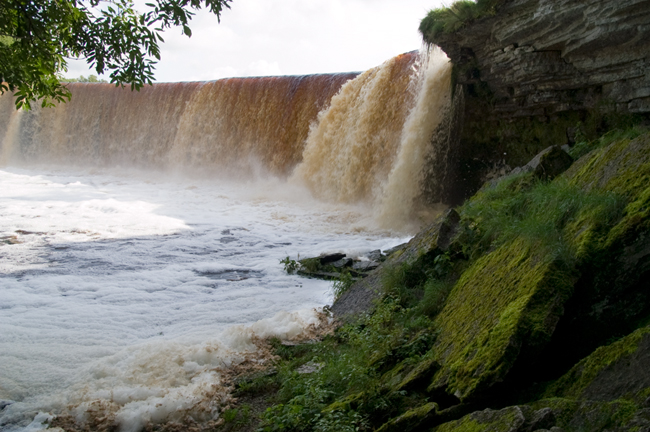 Keila Waterfall is located on the Keila River in Harju County, at where the river descends from the klint plateau into a small klint bay. It is the second-mightiest waterfall in Estonia after Jägala (6 m in height, up to 60 m in width, average discharge 6.5 m3/s, maximum up to 150 m3/s). The waterfall escarpment is an outcrop of rocks from hard limestones of Kunda Stage of the Middle Ordovician (the upper 2.5 m) to glauconite sandstone of Hunneberg Stage in the bottom part of the escarpment. The waterfall is retreating at a rate of app. 10 cm a year (Miidel 1991).

Valaste Waterfall is located in Ida-Viru County, 2.5 km east of Ontika Manor. With its 30 m of height (varying from 26 to 32 m depending on discharge), Valaste Waterfall is the highest waterfall in Estonia and in the Baltic States. It is not a natural fall but formed by directing the water of Kaasikvälja Main Ditch down the 54-m-high klint escarpment. The fall was first mentioned in 1852 in a Balto-German weekly newspaper Das Inland as a waterfall 60 fathoms high (1 Russian fathom = 2.16 m). 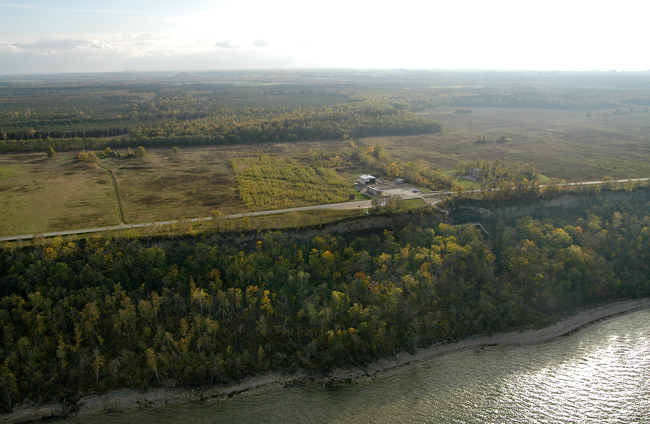 Joaveski Cascade on the Loobu River in Lääne-Viru County consists of 8 lower (0.5–1 m) limestone escarpments distributed over the distance of 150 m, with the total drop of 5.4 m. Before the construction of a cardboard factory and power station (1924), the river had also a fall with a higher escarpment (app. 3.5 m). Limestone for construction was extracted straight from the riverbed and the fall turned into a cascade. The small power plant was closed in the meantime but reopened in 1999 and now the cascade has to share its scarce water with the power station again. 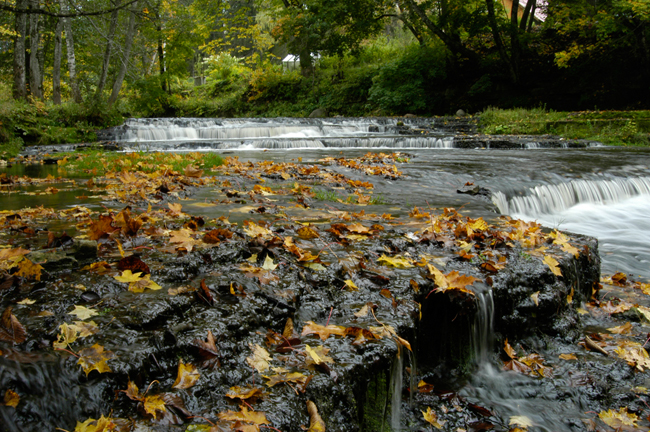 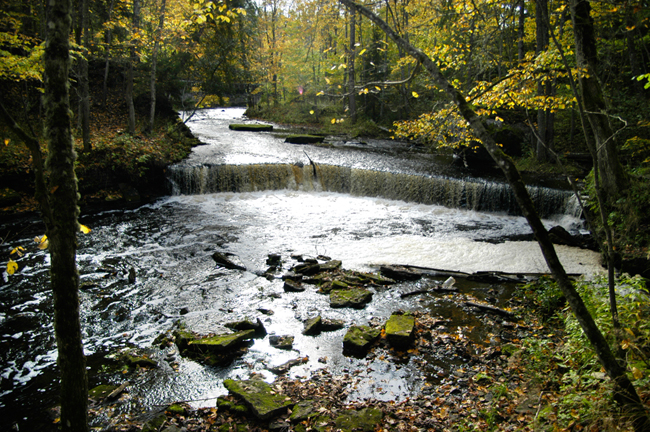 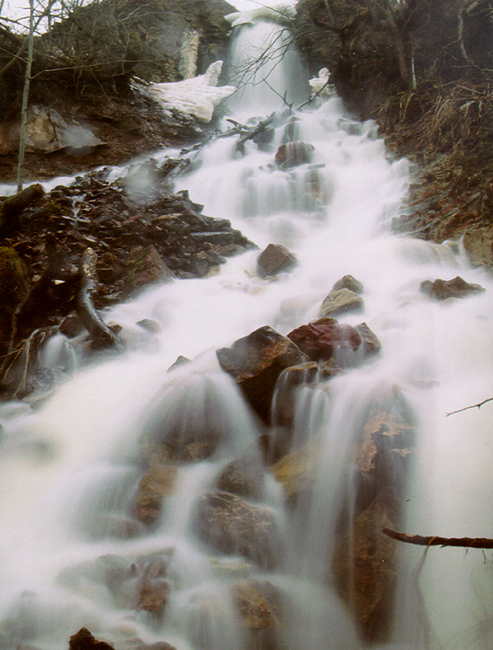 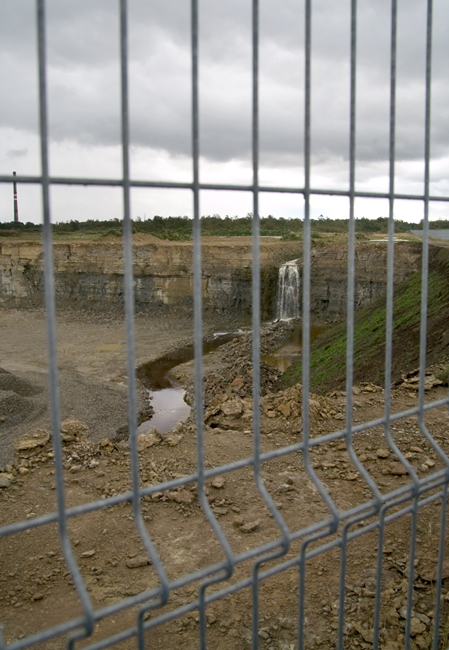