Standing in front of something great and amazing, man has often been asking: how and when was it formed? As long as man has lived on the Baltic Sea, he has been asking this question about the klint. As the Baltic Klint is a nature monument with a symbolic meaning for Estonia, Estonian researchers have been exploring this question more frequently than their colleagues in the East or West, North or South have. Although the studies on the klint have been mostly limited to the rocks outcropping on the klint escarpments, the fossils contained therein and the plant communities associated therewith, still many a scientist has focused also on the questions of the formation and nature of the Baltic and North Estonian Klint.

The first scientific records of the area of North Estonia date back to nearly 400 years ago (1619), when G. Mancelius, professor of Tartu University, mentioned the klint in his theological-scientific treatise on earthquakes. Somewhat later (1678), the klint was mentioned in a work on waterfalls by M. J. Herbenius, an alumnus of Tartu University. Karl von Linné, the founder and first president of the Swedish Royal Academy of Sciences and founder of modern plant and animal systematics, travelled on Öland in 1741 and described also the Öland Klint there. The rocks exposed on the North Estonian Klint, most of all black shale (Dictyonema shale), were first described by August Wilhelm Hupel (1737–1819) in his travelogue (1777). A Russian mineralogist Vassili Severgin (1765–1826) already mentions in his travelogue (1808) an escarpment extending from Tallinn to Narva and describes more or less recognizably also the rocks exposed there.

A peculiar hypothesis was set forth by E. Eichwald (1795–1876), who suggested (1840) that the escarpments on the southern coast of the Gulf of Finland were formed along a strong-current strait running from the Arctic Ocean to the Baltic Sea, with one (the northern) coast of the strait being a glacier and the other (southern) one being the North Estonian Klint.

One of the first (1844) better-reasoned hypotheses of klint formation, the one by a world-famous Scottish geologist Sir Roderic Imprey Murchison (1792–1871), was “tectonistic” and explained the formation of both the North Estonian Klint and the Gulf of Finland by a major fault in Earth’s crust running along the line of the present-day gulf and klint. K. Rathlef (1852) supposed that a fault with a raised southern wing ran along the North Estonian Klint.

C. Grewingk (1819–1887), too, thought (1861) along clearly abrasional lines, suggesting that the very same processes that are currently shaping the southern coast of the Gulf of Finland did so also in the pre-glaciation period.

Also B. Doss (1913) explained the formation of both the Gulf of Finland and the North Estonian Klint with a fault and supposed that even the flammable gas of Keri Island was formed of Dictyonema shale that got submerged deep into the bowels of the Earth with the sunken block.

As supposed by A. Mickwitz (1907), the North Estonian Klint was lifted up by a glacier arriving from the north across the Gulf of Finland and gliding along the surface of Cambrian sandstones.

A Finnish geologist W. Ramsay (1865–1928) suggested (1910) that the escarpments of the Baltic Klint began to form app. 40 million years ago in Palaeogene. He associated the process with the jointing and divergence of Earth’s crust in the East Atlantic (west of Norway) in this period, which in turn led to a significant rise (up to 400 m) of Earth’s surface in the region of the future Baltic Sea.

The first escarpment on the boundary between the hard crystalline basement and the overlying softer sedimentary rocks was formed near the northern coast of the Gulf of Finland. A. Jentzsch (1914) views the Gulf of Finland as a glacial valley where Cambrian sandstone and blue clay have been simply eroded off by a continental glacier, which moved from east to west.

According to the Pra-Neva hypothesis, the Pra-Neva River emanated from the area of the White Sea and flew west along the boundary between hard crystalline rocks of the Baltic (Fennoscandian) Shield and the softer sedimentary rocks covering the Russian Plate (Greisler et al. 1980). The Pra-Neva, flowing on a hard, more wear resistant crystalline basement (gneisses, granites, migmatites, etc.) with a slight southward dip (2–3 m per km), was denuding its southern bank consisting of softer sedimentary rocks more intensively and therefore shifted itself, too, gradually southward.

The Pra-Neva hypothesis allowed to explain the removal of the clastic matter from the Baltic Klint area but failed to explain where it was transported. A giant complex (up to 1.5 km thick, on app. 100 000 km2) of about 1–10-million-year-old clastic deposits has been found (Overeem et al. 1998, 2001) in recent years at the bottom of the North Sea at west of the Danish Straits, in an area called the Eridanos Delta. This has been supposed to be the “lost material” carried off the denudation area of the Baltic Klint by the hypothetic up to 2700-m-long giant river Eridanos, which began somewhere in the area of Lapland and ran across the eastern part of the Gulf of Bothnia and the western part of the Baltic Sea down to the Polish coast and from there across Denmark and German north coast into the North Sea. Pra-Neva played merely the role of one of the few eastern tributaries of this giant river. The Eridanos River ceased to exist about a million years ago due to the invasion of a continental glacier.

The Eridanos River got its name from an Old Greek legend according to which Phaeton (Faeton), son of Helios, was pushed down from the Vault of Heaven by Zeus with a lightning bolt and fell into this very river invisible to human eye. The Heliades (daughters of Helios, God of the Sun) came to the banks of this river to bevail their slain brother. Their bodies turned into poplars and their tears into amber. In the legends, the Eridanos River has been most often associated with the River Daugava (or Gauja).

Some researchers (Puura 1991, Puura and Flodén 1997) see the boundaries of the Baltic Basin, a distant predecessor of the Baltic Klint, already in the time more than a billion years ago. 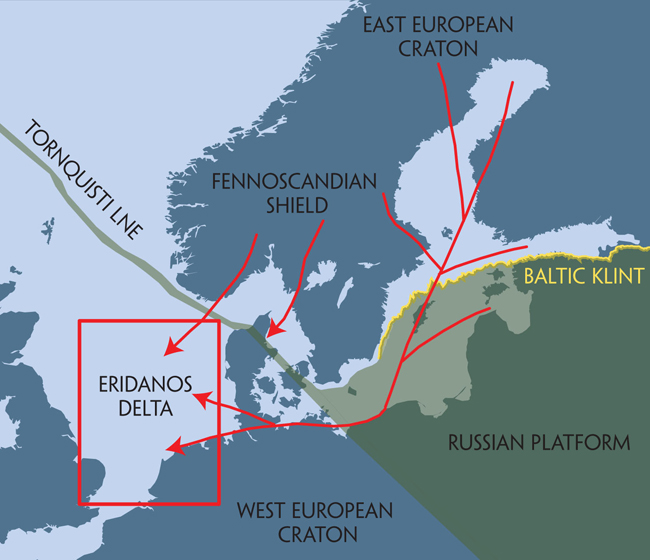 The Eridanos River and the Baltic Klint.