East Viru Klint encompasses about 70 km (94 km along the escarpment line) in Ida-Viru County, between the Pada Valley and Sillamäe Town. The klint section is characterized by an up to 55-m-high, rather straight-running Ontika-type escarpment bordering the limestone plateau here. 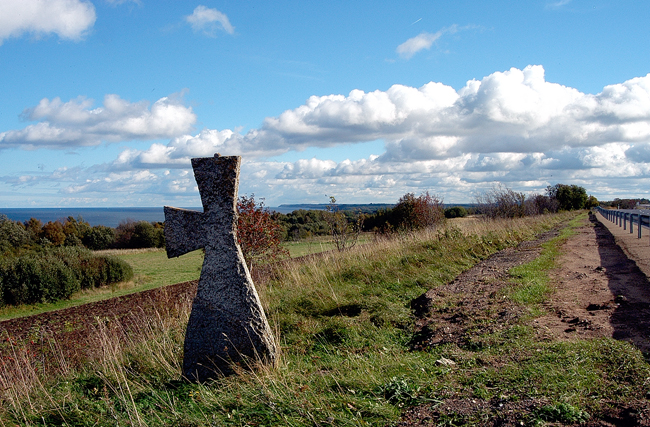 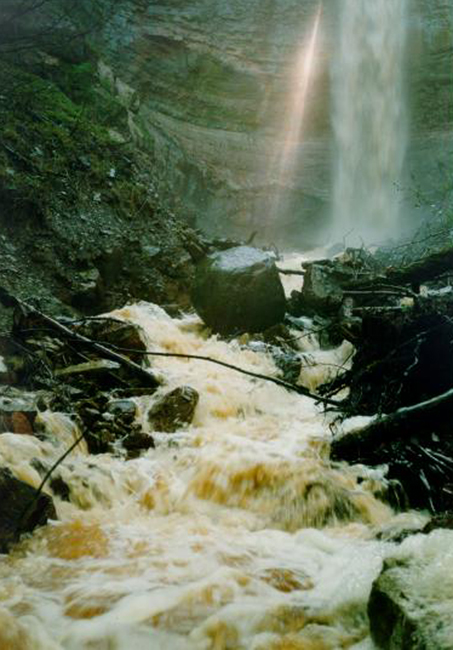 51. Kalvi Klint Island (15 km2) is separated from the North Estonian Limestone Plateau by the Aseri Fault (in the south) and the Pada Klint Valley (in the west). The limestone plateau of Kalvi Klint Island has a slight southward dipping (52 m asl in the north and 47 m in the south). West of Kalvi Manor, the klint island is bordered for about 5 km by a Kunda-type escarpment, in which also the escarpment of the phosphorite complex differentiates to some extent. At Kalvi Manor, all three above-mentioned escarpments join into one, app. 50-m-high Ontika-type escarpment.
A Tudor-style knight’s castle is located on the Cambrian sandstone terrace at north of the old manor house. The castle was completed in 1913. After still another reconstruction and extension, the castle now accommodates an exclusive guesthouse and restaurant. 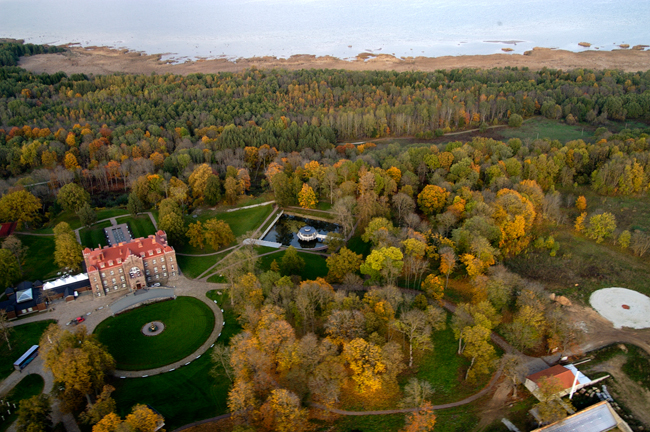 52. Aseri Klint Bay cuts up to 8 km into the klint plateau in more or less east-westerly direction, separating Kalvi Klint Island from the plateau. The northwestern coast of the klint bay follows more or less the course of the Aseri Fault. The southern coast of the klint bay (Kõrkküla Klint Plateau) is bordered by a 3-step klint terrace. Aseri is known first of all for its Cambrian blue clay, as this 535-million-year-old clay has been extracted here already since 1936. 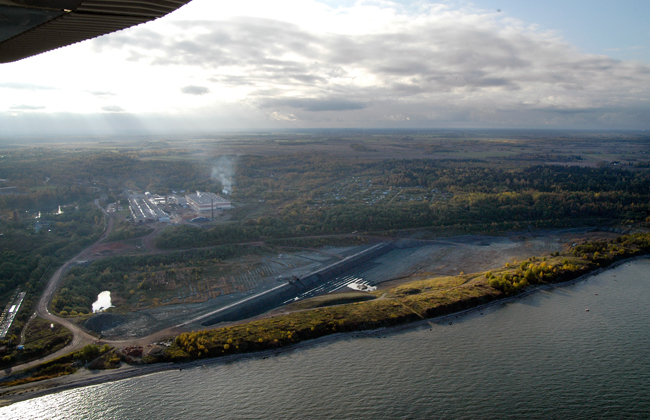 53. Kõrkküla Klint Plateau, which rises up to the level of 59 m asl at its northern edge, encompasses nearly 15 km between the Pada Valley and Sõreda Stream. The klint plateau is bordered with a partly buried 3-step terrace. From the side of Tallinn-Narva Highway at Kõrkküla Village opens a beautiful view over Purtse Hiiemägi and the klint escarpment bordering the Saka-Ontika Klint Plateau. 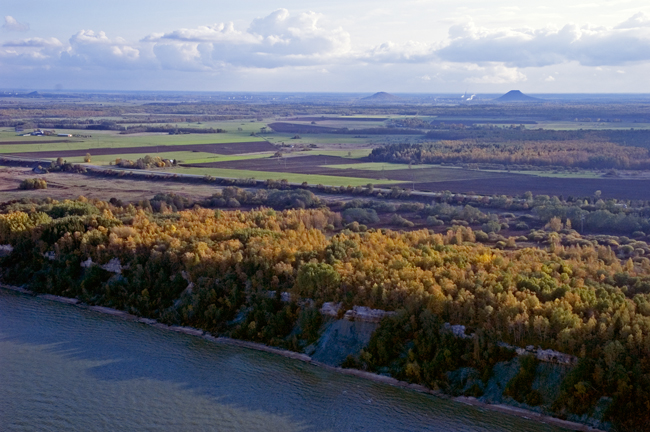 54. Purtse Klint Bay penetrates 3 km long and nearly 6 km wide into the klint plateau in the area between Liimala Village and Moldova Village. At Purtse Village the klint bay narrows from 1.5 km to become an app. 200-m-wide klint valley. The klint island of Purtse Hiiemägi splits the klint valley into two nearly equal branches.  On the western bank of the Purtse River lie two limestone-covered up to 20-m-high and app. 200-m-diameter hillocks – Linnamägi and Uueküla. On Linnamägi Hill lay an ancient Estonian fort named Taramägi in the 1st century. An even more famous Tarakalda Fort (in use in the 8th–13th century) was located 2.5 km downstream of Taramägi, on the west bank of the Purtse River. Archaeological finds (arrowheads, rune stones) suggest close connections of the fort with the Vikings. The eastern branch of Purtse Klint Bay is broader and has more distinct terraces. 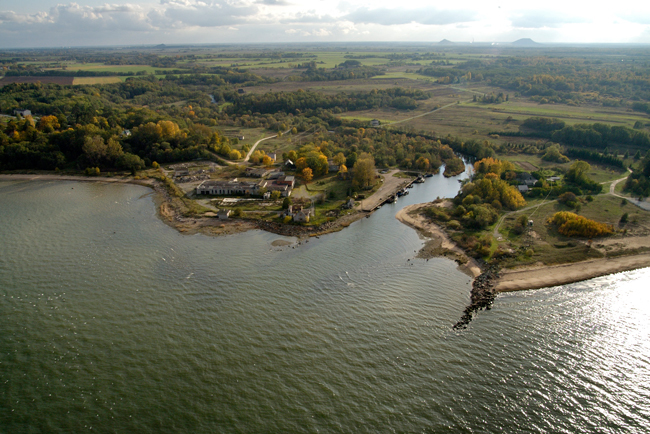 55. Purtse Hiiemägi Klint Island, app. 1.5 km long and up to 0.7 km wide in its seaward part, divides Purtse Klint Bay into the eastern and western branch. On top of the klint island, at 45 m asl, there is a narrow plateau of Ordovician limestone. The klint island is bordered in the north with an up to 40-m-high abraded escarpment.

Under the southern slope of Hiiemägi lies the vassal fortress (tower fortress) of Purtse, which was established in 1553 by the notorious vassal Jacob Taube (said to have acted as a pirate). In the southern part of Hiiemägi there is the Memorial Park for the Victims of Cruelty, which is dedicated to all victims of red terror in Estonia. 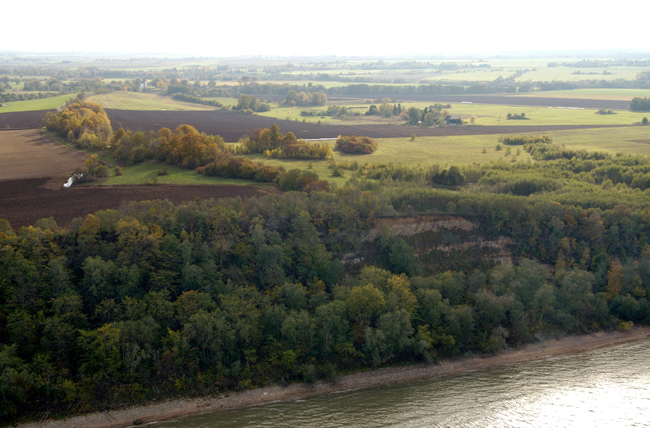 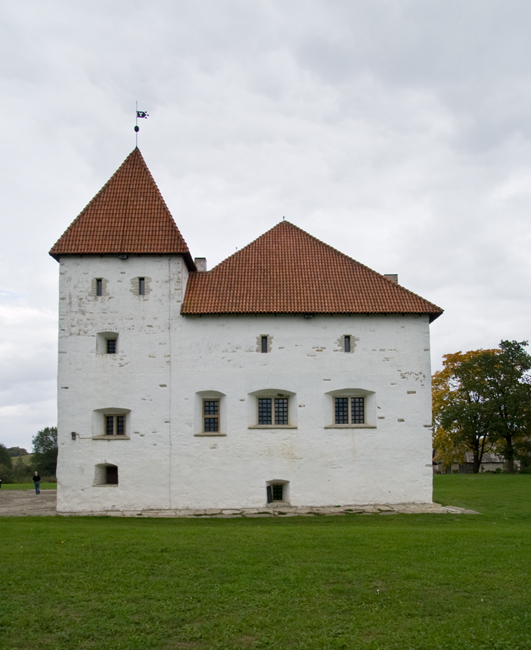 56. Moldova-Aa Klint Bay is nearly 6 km wide and penetrates up to 1 km into the klint plateau between the western edge of Moldova Village and Saka Manor. The Ordovician limestone plateau in the area adjacent to the klint bay has a southward dip (up to 4 m/km). Near Saka Manor the escarpments join into one, laying a basis to the highest, longest and most monolithic cliff of the North Estonian Klint – the Ontika-type escarpment bordering the Saka-Ontika Klint Plateau. 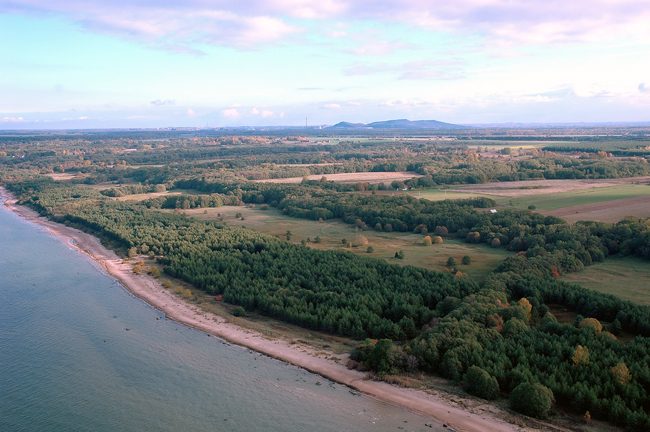 57. Saka–Ontika Klint Plateau is edged in the north by an app. 50-m-high and rather straight-running Ontika-type escarpment and encompasses app. 20 km between Saka and Toila. The klint plateau is 2–3 km wide and lies at the altitude of 50–55 m asl, with the usual southward dip being either absent or very small (1–2 m per km).

A hotel named Saka Cliff & SPA is now located here. It is planned that the Baltic Klint Visitor Centre will be built at the restored manor house in near future and various exhibits introducing the Baltic Klint and the rocks and the surrounding park will be opened. 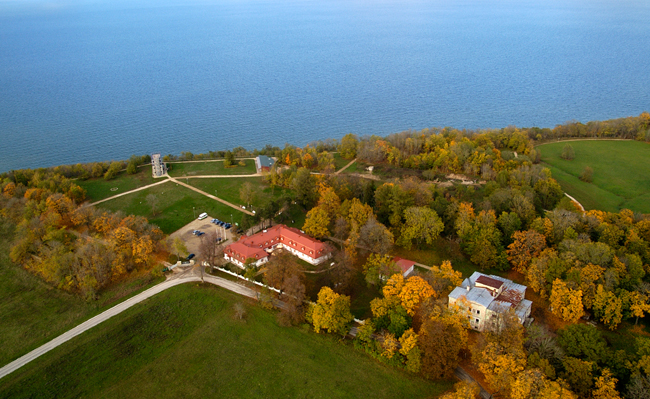 None of these waterfalls are natural but formed at the mouth of a drainage ditch directed down a klint escarpment. They were dug already in the middle of the 19th century. 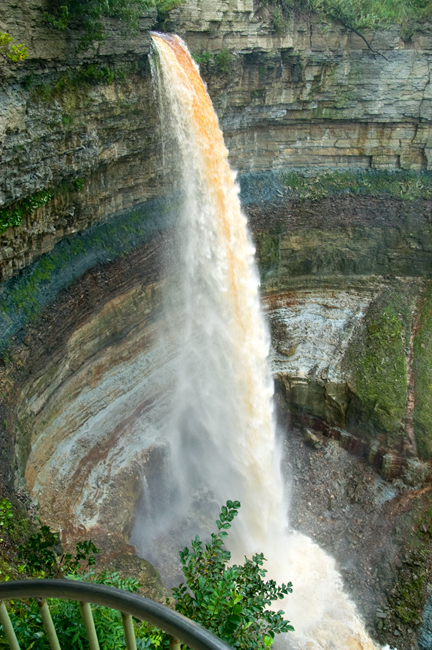 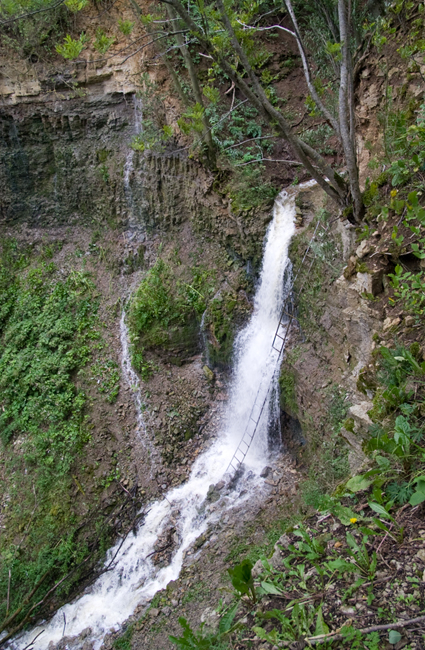 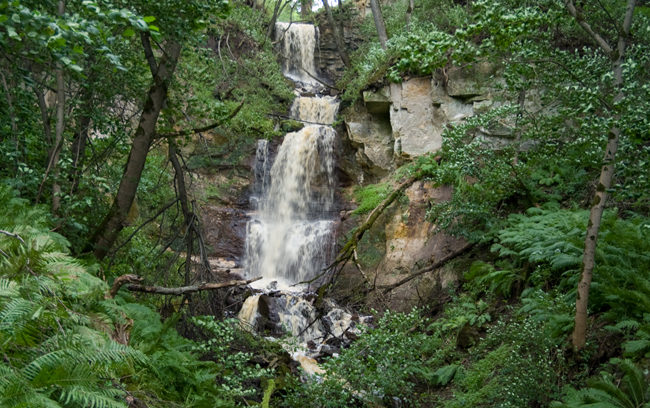 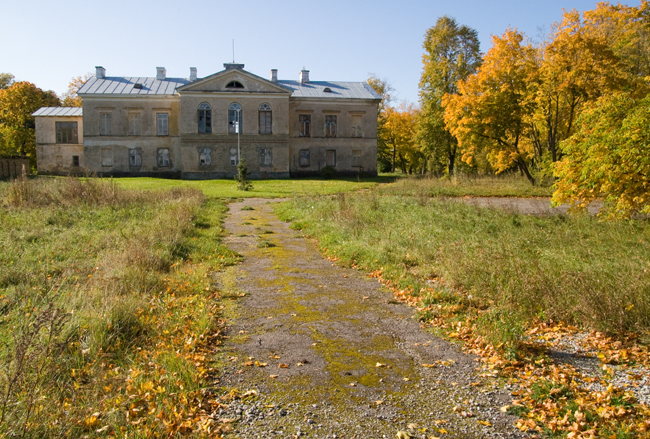 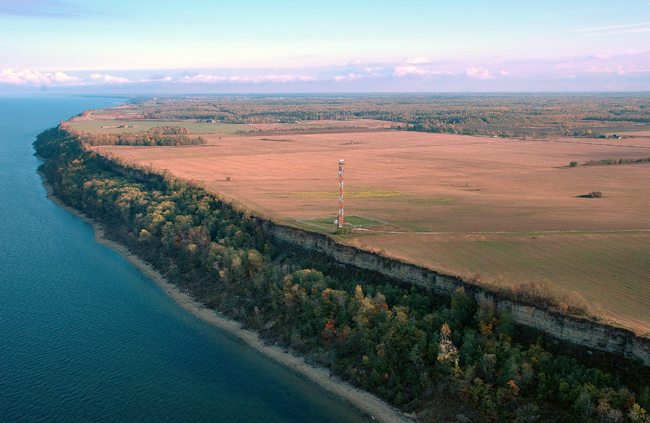 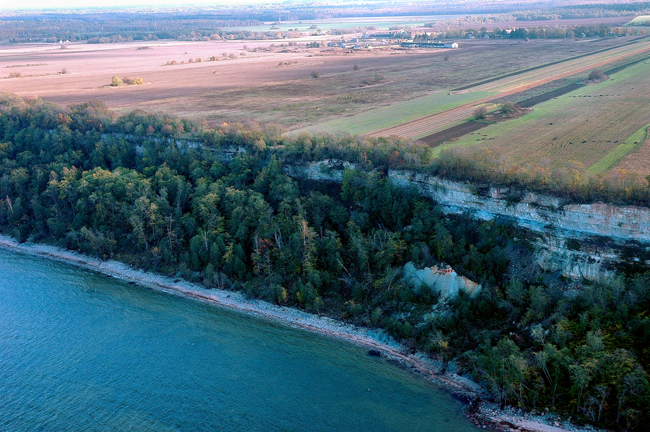 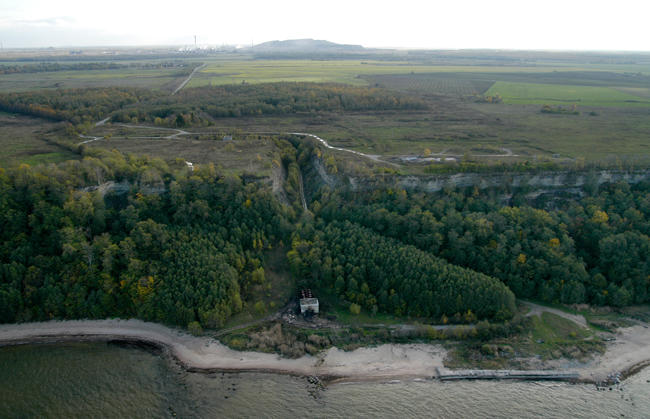 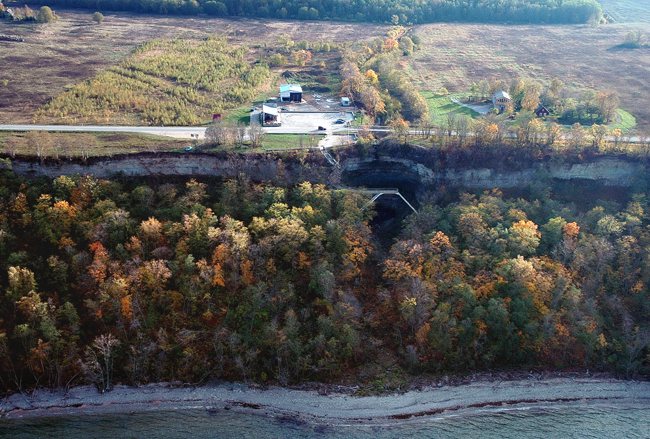 58. Toila Klint Bay penetrates in a V-shape for nearly 1.5 km into the klint plateau at west of the Pühajõgi River Valley. The Cambrian sandstone bottom of the klint bay lies at app. 30 m asl. A deeper cut into the bedrock (up to 35 m) occurs in the bed of the Pühajõgi River, which runs pressed against the eastern bank of the klint bay. Mägara Stream (western tributary of Pühajõgi) descends from the klint plateau over a 5-step and 15-m-high cascade located in an app. 300-m-long and up to 10-m-deep Aluoja Canyon. 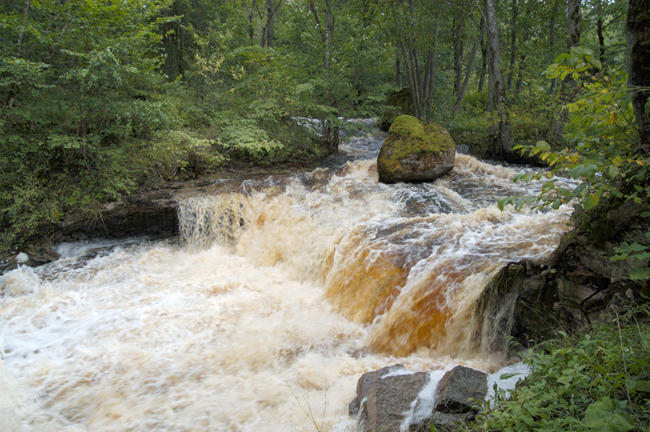 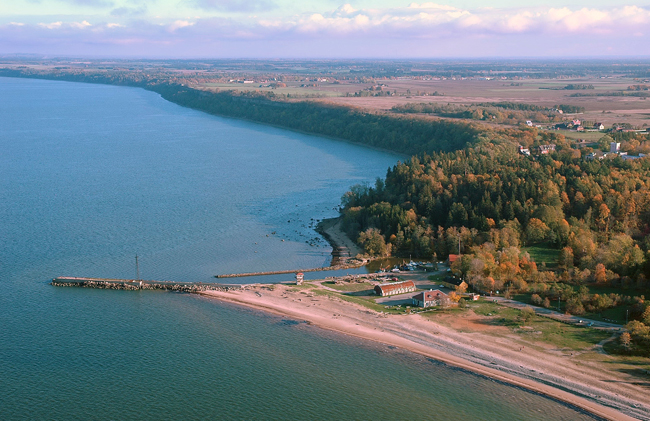 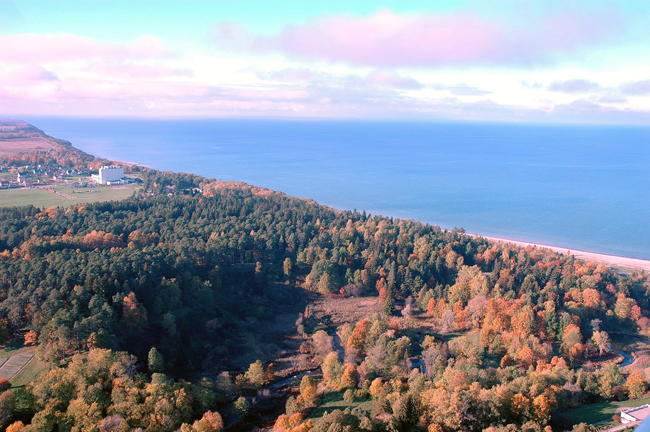 59. Pühajõgi Klint Island encompasses an app. 5-km2 triangular area between the Pühajõgi Valley (in the west) and Konju Ancient Valley (in the east). The klint island is bordered in the north by a 45–47-m-high Cambrian-Ordovician escarpment. The width of the klint forest zone bordering the foot of the escarpment has decreased down to a dozen metres here in places.

In 1897, G. Yelisseyev, merchant and owner of department stores in St. Petersburg, started to build a summerhouse (known as Oru Castle) at the mouth of the Pühajõgi River. The castle along with the adjacent 90-ha park was completed in 1899. During the October Revolution (1918), Yelisseyev fled to France and the Republic of Estonia, who expropriated the lands of Pühajõe Manor in 1919, left the house and its surroundings in his ownership. In 1934 a group of Estonian businessmen bought the real estate and the park and granted them to the Republic of Estonia as a summer residence of the President. The house was burnt down by the retreating Soviets in 1941 and the ruined house was blasted by Germans in 1944. 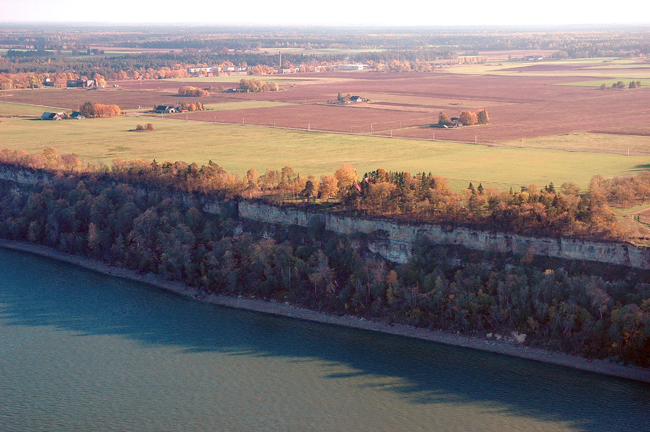 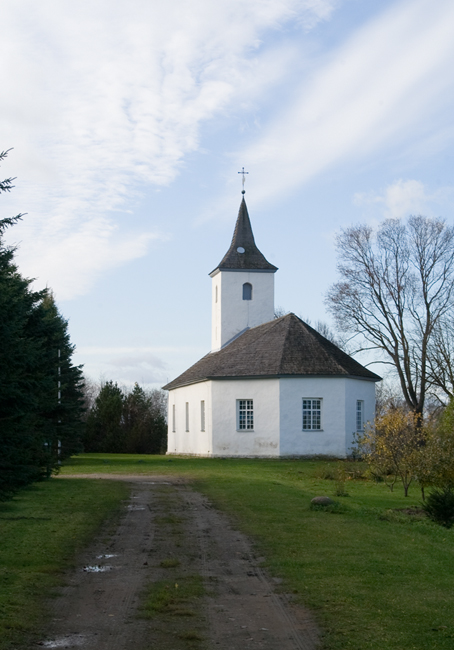 60. Voka Klint Bay, in the eastern part of which lies Voka Village, borders on Pühajõgi Klint Island in the west and the Päite Klint Plateau in the east. At about 3 km from the sea, the klint bay changes smoothly into the Konju Ancient Valley. The limestone plateau lies almost equally at 43 m asl on both sides of the klint bay. An up to 25-m-high escarpment at the coast exposes the deposits (fine-grained sands) filling the klint bay.

In 1781, Voka and Toila Manors were bought by Baroness Elisabeth Chudleigh (1720–1788), Duchess of Kingston. The duchess established a distillery and drugstore at Voka and also an imposing wooden manor complex was built during her time. 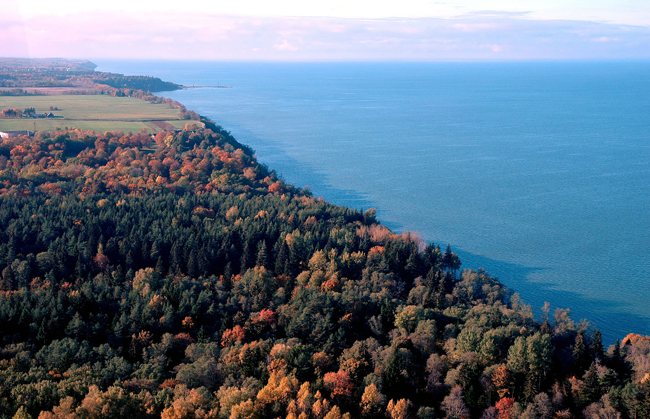 61. Päite Klint Plateau lies at 40–42 m asl and is bordered in the north by an up to 40-m-high escarpment, encompassing nearly 7 km between Voka and Sõtke Klint Bays. Päite Cliff is one of the most remarkable coastal cliffs on the Baltic Klint. First a high and colourful nearly 40-m-high escarpment facing the sea, then a narrow strip of klint forest, if any, and a high open alvar on the klint plateau above this all. Although Päite Cliff is inferior to Ontika in height (40–42 m and 50–55 m, respectively), it is still nearly 20 m higher than Pakri Cliff.

In the eastern part of the klint plateau, on the border of Sillamäe town, Ukuoja Stream descends from the escarpment over the 8-m-high Ukuoru Waterfall. It is the fourth waterfall on this stream. 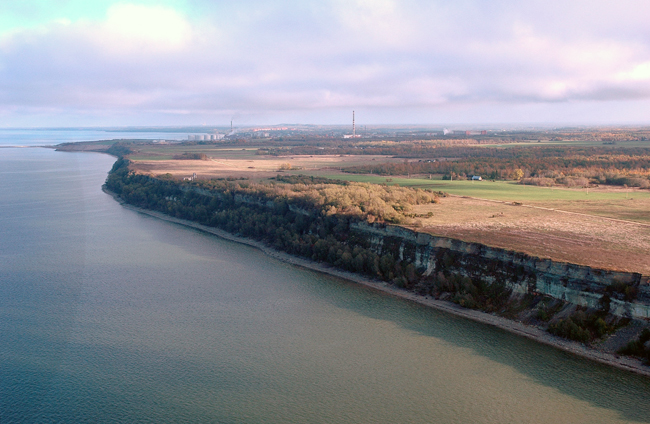 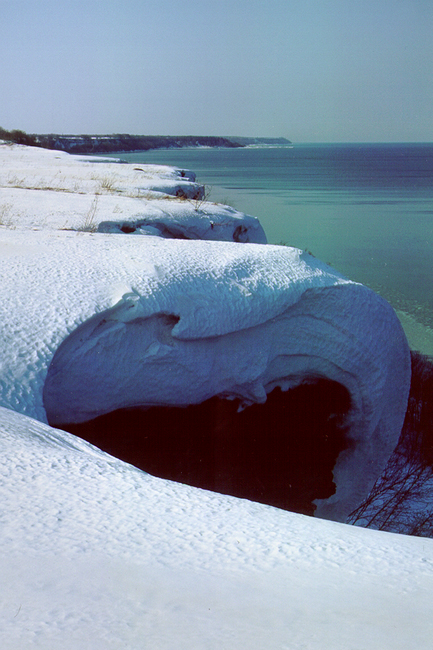 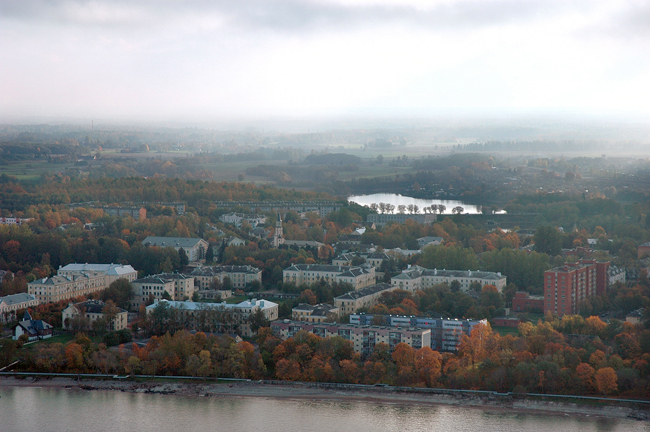